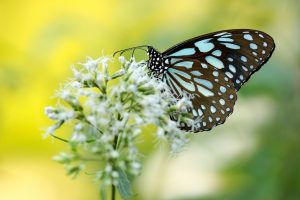 The transition from a creeping, worm-like animals to a colored, winged insect is huge, not only in appearance but also in terms of lifestyle. Therefore butterflies symbolize transformation and new beginnings.

“There is a beautiful story about a caterpillar that lived much of its life believing that it had come into being only to eat and sleep and do what the rest of the caterpillars did. However it was unhappy. Somehow it sensed that its life had another dimension not yet experienced.

One day, driven by a strange longing, it decided to become still and silent. It hung from the branch of a tree, weaving a cocoon around itself. Inside the cocoon, although constrained and uncomfortable, it waited, sensing and aware. Its patience bore fruit, for when the cocoon burst open, it was no longer the lowly worm that went in, but a beautiful, resplendent, winged butterfly which dazzled the sky. It soared and flew, no longer limited to its worm-like existence, but free and unbounded. The caterpillar had been transformed into a thing of air and lightness, magic and beauty.

Once the transformation had taken place, it was impossible for the butterfly to return to being a worm. In the cocoon, the caterpillar had become one with its inner being and in this union it reached its ultimate nature. What happened in the cocoon can be described as yoga. Yoga is the path towards being boundless.

Yoga transforms and liberates human beings so that they can reach this unbounded state. Humans, unlike animals, are not merely existing. They are becoming. To evolve as a human being is to become aware of one’s limitations; to strive, with intense passion, towards the transcendence for which we all have the potential.”

“We delight in the beauty of the butterfly, but rarely admit the changes it has gone through to achieve that beauty.” – Maya Angelou